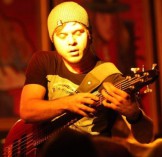 Kent Beatty has been on his way to the forefront of modern bass playing since he started at age 12. Influenced by such legends as Flea, Les Claypool, Victor Wooten, and Stuart Zender, his style has caused audiences to compare him to his musical heroes. He performs at various bass events and competitions, and has even been introduced on stage by Victor Wooten himself. Kent is best known for his 5 years touring internationally with Hamilton Loomis, and for his ability to blend solid musicianship with solo performances. He works with several artists and also records with his various rock, jazz, funk, and fusion projects yet to be released. No stranger to clinics, Kent has shared his love of music at workshops, schools, and rock camps around the world to all ages and skill levels. He is currently touring with Brother Dege, whose music is featured on Quentin Tarantino's "Django Unchained" film soundtrack, as well as the Discovery Channel and the National Geographic Channel.

"Kent and myself, (TM Stevens), was in a room in Anaheim California during the Namm Show, jamming on our bass guitars, and I noticed that Kent also has that "Thunder Slap" that I treasure with my bass playing. 'I Groove to Move, and Play to Make, The People Dance, Clap and Shake'. Welcome to the Ultra Funk Club Brother Kent!!!"

Performed in 2009 at Primary School Music Workshops in Yorkshire, England

Performed in 2010 at Primary School Music Workshop in Yorkshire, England

Featured in 2011 on notreble.com June, December, and Weekly Top 10

Performed in 2011 at Boy Scouts of America Music Workshop in Wichita, KS

Clinician at 2013 Basses on the Plains in Wichita, KS

Performed at 2013 One Day of Bass in Chicago, IL

Clinician support in 2014 for Gregg Wright in Crowley, LA

Featured in 2014 on musicians-corner.net in April and December

Clinician at 2014 Basses on the Plains in Wichita, KS

Featured in 2015 on musicians-corner.net in November

Member of Artist Jury in 2016 on musicians-corner.net for 2015 Music Journalist of the Year w/ Will Calhoun & Mfa Kera

Demo support at Winter NAMM 2019 for Hedras Ramos at StageClix in Anaheim, CA

Featured in 2019 on musicians-corner.net in May

Guest interview in 2019 on TheBassist.net Episode 72 with Kent Beatty – The Bassist Podcast/YouTube/Spotify in October

Guest interview in 2020 on Bass Extracts #stayathomestudio chat in April

Welcome! My name is Kent Beatty. I am a musician from Louisiana, USA. From around the age of 5, I was attempting harmonica and soon learned the viola. That eventually led me to the bass guitar. Over the years, I've played bass in several bands and in several countries. I've been known for original solo compositions as well as "extreme" bass techniques. All of that takes a backseat to providing the tight rhythm section a professional band requires. My tour schedule has been solid for the last 6 years - around 150 shows per year. During that time, I was the bassist for Hamilton Loomis, performed solo bass events, clinics, and shows with my own bands. Recently, I've taken time off from the road to focus on my music and other priorities. I've been hired since then in a variety of situations, including subbing in a modern country band at House of Blues in Myrtle Beach, SC - with a few days' notice. Now I am booking for 2014 and available for genres ranging from metal, rock, and pop, to funk, R&B, and country. Traveling frequently has taught me to be prepared. I have gear available in other countries, my passport is ready, and I travel light.

On or off the road, I am available for recording sessions. If your project needs bass recorded - electric, fretted, fretless, or upright - contact me here or via e-mail to discuss options. If the session is not along the Gulf Coast USA, I can remotely upload 24-bit audio to you.

I also have a love for animals, technology, and photography, so you may see bits of my personal side from time to time. Keep in touch with me through your favorite social media app, and thank you for visiting KentBeatty.com!

Full Time and Sub Work as a Bassist With

Recording history and more on the Discography & Credits page

Check out pictures & videos from recent events & performances in my photo gallery.